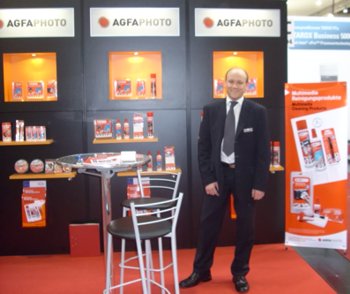 CeBIT Computer Show in Hannover has ended. CCM has participated the first time and is more than satisfied.

Bernd Zimmermann, MD Sales & Marketing: "The choice of the "Planet Reseller" area in hall 25 was exactly the right for us. Here we could get the contacts we are looking for, namely distributors and retailers, with focus on export. We were really enthusiastic about the resonance on our AgfaPhoto cleaning products and could make a bigger number of new contacts.

CeBIT 2009 got off to a powerful start and ended on a successful note, boosting optimism in the world ICT industry. A majority of the 4,300 companies from 69 countries drew fresh optimism from being at CeBIT. A huge number of exhibitors and visitors are now leaving Hannover with a renewed sense of buoyancy as well as bulging order books and a solid foundation for new business. The show had lived up to their expectations.

More than 400,000 visitors – a drop of just under 20 percent on the previous year’s figure – came to CeBIT 2009 to generate new business. A marked increase in the trade visitor ratio however meant their expectations were often exceeded. Companies who came well-prepared reported a jump in significant business leads of more than 20 percent ted. This CeBIT has been a good investment for exhibitors and visitors alike, delivering real benefits to everyone.

The percentage of visitors from abroad remained steady at 20 percent. A decrease in attendance from Asia was offset by increased attendance from the Americas and the Middle East.

Ernst Raue, the Deutsche Messe Managing Board member in charge of CeBIT, on Sunday in Hannover.
"The organization of a trade fair with a truly global impact, involving the participation of 4,300 exhibitors and more than 400,000 attendees – particularly in times like these – is a real achievement for us and the industry as a whole, underlining the drawing power of CeBIT." We are once more seen as a dynamic event. Several companies who decided against having their own stand this year have expressed a clear interest in rejoining the event in 2010."